House on the moon and opera in the fjords

March 15th I attended the GROW innovation conference in Bergen for the second year. It was a day for inspiration and new perspectives. 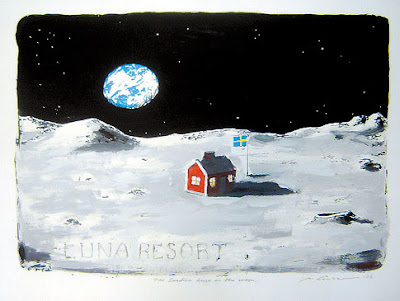 Most refreshing I found the talk of the Swedish artist Mikael Genberg whose project is to build a little red house on the moon - Luna Resort. The project seems more likely to matrialize than I thought at first. In 2008 NASA gained interest in the project and invited him for a meeting. You can read about the project in his blog (swedish). Other interesting projects of his are the Woodpecker Hotel located in a tree in the central park of Stockholm, and a underwater hotel 3m below the surface of Lake Mälaren near Stockholm. He also has a underwater hotel project at Zanzibar in progress.
The lesson to take home from his talk is that you only need  three things:

Steinar Sørli held another very inspiring talk. He and his male partner and their dog, are the hosts of one of the most excotic tourist attractions in Norway - Åmot Opera Farm.

They have  managed to book the superstar soprano  Kiri Te Kanawa and are rated as one of the most exostic destinations in Scandinavia by CNN.

Wow! Such an amazing and helpful post this is. I really really love it. It's so good and so awesome. I am just amazed. I hope that you continue to do your work like this in the future also. underground oil tank removal cost

Thanks a lot for sharing us about this update. Hope you will not get tired on making posts as informative as this. purchase instagram likes paypal

Super site! I am Loving it!! Will return once more, Im taking your food likewise, Thanks.
essay service

However, we always remember which what matters the majority of is how you use the internet to display your specific talents.casino på mobilen