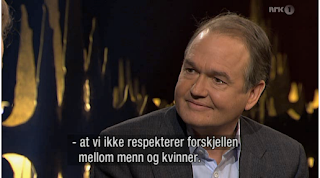 Author John Gray of bestselling "Men are from Mars and Women are from Venus",  made Friday night  an embarrassing appearance on a talk show jointly broadcast in Norway and Sweden on Friday evenings.

Anyone who tries to understand fellow humans in terms of only two categories is by definition less intelligent.


In his effort and frustration of failing to make real world Scandinavia fit his outdated mental model of Men from Mars and women from Venus, he turned arrogant and offensive. His high integrity counterparts, the Norwegian foreign minister Jonas G. Støre, the Swedish rap artist Jason Michael Robinson Diakité and Swedish ex politician Mona Sahlin treated him with to much politeness - probably only to keep Friday entertainment away from turning into a complete disaster. The whole experience was simply put embarrassing.

I ask myself the question: How can anyone end up stuck in such outdated models (if they ever have been relevant at all), without any accumulation of new knowledge?

The widely used Myer Briggs personality type indicator based on Jungs research is also a huge simplification, but it uses at least 16 categories rather than two : Men & Women.