Many of the books I read this year, gave me new perspectives and changed the way I think. Following up on the "Books I read in 2011" 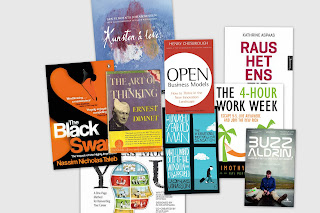 Raushetens tid, Kathrine Aspaas, read Dec 2012
An inspiring book by the finance journalist who put her personal transformation in becoming a more open and sharing person into a bigger context. We are moving into times where openness - fueled by social media, change the way we do business and live our lives. A very eye-opening analysis of the zeitgeist anno 2012.


Language intelligence: lessons on persuation from Jesus, Shakespeare, Joseph J Romm, read August 2012
A real handbook in rhetoric that is understandable for most of us with great examples from Lady Gaga, George Bush, Obama etc.
I stumbled upon a review of this book on realclimate.org. The author, a climate activist is blogging on  climateprogress.org. His motivation for writing this book was having larger impact in the climate debate.


Open Business Models: How To Thrive In The New Innovation Landscape, Henry Chesbrough, March
New ways for companies to innovate by involving partners, suppliers or customers in their innovation process. Not only create business models that increase your innovation, but also capitalize on your innovation inventory (ideas) that maybe other companies can bring to marked.

The Black Swan: The Impact of the Highly Improbable, Nassim Taleb, read May 2012
The random and improbable events have shaped history and will shape our future to a much larger extent than we think. This book removes the blur and misconceptions that prevents us from seeing this. See my review here.

The four hour workweek, Timothy Ferris, read June 2012
This guy is extreme, and I stumbled upon his blog when i did some googling related to my blog post Todo or Not Todo is that the real question. Outsource your life with a personal assistant in India ? I was so fascinated that I downloaded the book on Kindle. Tim work only 4 hours a week and spend the rest of his time pursuing his dreams. His idea of rich is not about the money but imagining what you would do if money was not a restriction. Provoking, but still important lessons to learn about personal productivity by being hyper focused when you work, go on a strict media and e-mail diet, and alot minimum time for the task. This insight is based on Parkinson's law: "A task will swell in importance and complexity in relation to the time allotted for its completion". Pareto´s law is also an important idea behind Tim Ferris thinking. And finally;  "goals that seems almost impossible are most motivating".

The 100-Year-Old Man Who Climbed Out the Window and Disappeared, Jonas Jonasson, read June 2012
This is just a really funny, well written history about a hundred year old man that escapes from the celebration of his 100th anniversary at the old people's home. The "road movie"-like story, that takes place in the current, is blended with the retrospective story of his life. In incredible ways he is placed into many of the events that shaped the history of the last century like the making of the nuclear bomb, Second World War meeting Stalin, Churchill,Truman and Mao just to mention a few. A really entertaining book that will keep you chained to your favourite chair.

Buzz Aldrin, What Happened to You in All the Confusion? A Novel by Johan Harstad, read summer 2012
I found this novel about Matias who just wants to be invisible in life, sligthly depressive. After a mental breakdown, he finds himself in the Faroe Islands where he spends a decade trying to repair his life. It must have caught me somehow, since  I did finish the book. It is well written, and describes physical and mental landscapes poetically in a way that evoked my slight depressive state of mind :-)

Business Model You: A One-Page method for reinventing your career, Clark, Osterwalder, Pigneur, read May 2012
The ego version of the popular Business Model Generation book. My neighbor came with this book as I was in between jobs. If you are self employed its probably a great book, if you are not, it still gives you new thoughts on how to present yourself to future employers. What is your value proposition ?

The Art of Thinking, Ernest Dimnet, read April 2012
Found this old book in the bookshelf, probably inherited from my grand-parents.
Ernest Dimnet (1866-1954), was a French priest, writer and lecturer. The book was a best seller in the US in the 30´s. The knowledge of what constitutes and fosters deep thinking is absolutely relevant in times of "The shallows" were we all restlessly surf our way through social media and Internet.

The Art of Living, Jan Vincents Johannessen, read Feb 2012
This Norwegian classic has been on my wish list since I read about it in a blog post. The author is just one of these rare multi talents that have achieved what the rest of us would need at least 5 lives to do. Professor Jan Vincents Johannessen, M.D., Ph.D., Dr.h.c., is a scientist, a bestselling author, a platinum awarded songwriter, a poet, composer, film worker, painter, designer, photographer, and glass and jewellery artist, as well as a public speaker, coach, columnist, and even chairman of major cultural institutions. He has been awarded several honorary memberships in medial and scientific societies, doctorates and professorships, and also been decorated by a large number of kings and presidents. This book gives us some insight into his very simple philosophy and lessons on how to live our lives.

Autobiography of a Yogi, Paramahansa Yogananda. feb 2012 To be honest I never read it - thought it would reveal some great insights since, according to the biography, Steve Jobs read this book once every year. Me and Jobs are on different planets. Did  only manage to get through the first  two chapters
Lagt inn av Fredrik Harloff @harloff kl. 12:44 PM

Alternatively, if you already have a web hosting plan that supports PHP and MySQL, you can install your own WordPress on your server. This can be done by visiting WordPress.org and downloading the necessary files.

Recently, I have commenced a blog the info you give on this site has encouraged and benefited me hugely. Thanks for all of your time & work. Urdu Inpage 2009

Wow, excellent post. I'd like to draft like this too - taking time and real hard work to make a great article. This post has encouraged me to write some posts that I am going to write soon. https://www.tellyexpress.com/

Thanks for giving me a good information

Love to read it,Waiting For More new Update and I Already Read your Recent Post its Great Thanks.https://biggboss16.site/?p=996&preview=true