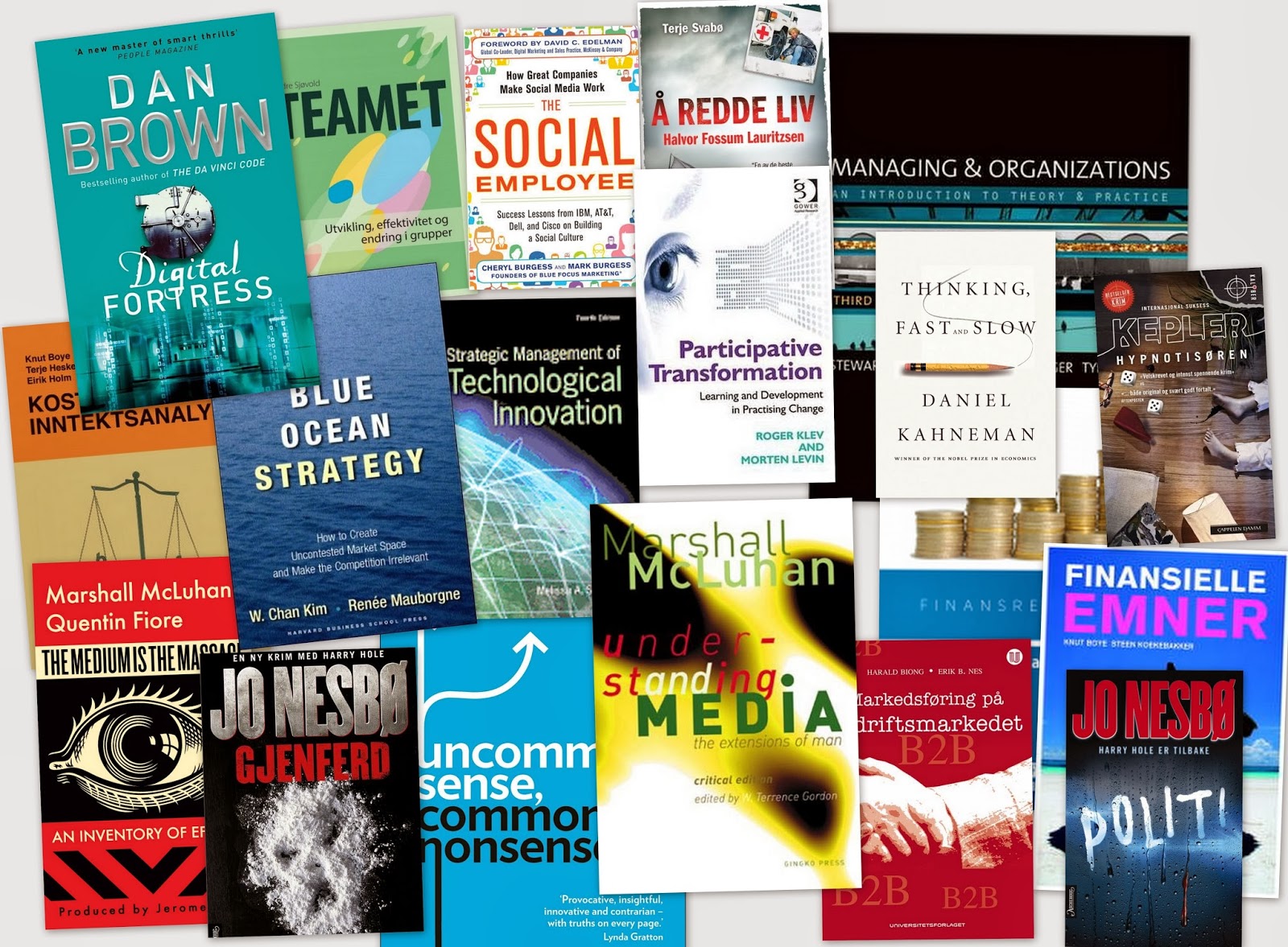 My reading in 2013 was to a large extent dictated by management literature from the course Master of Technology Management at Norwegian School of Economics and Norwegian University of Science and Technology.

However there is always room something else...

(The Team - development, efficiency and change in Groups), Endre Sjøvold, January
Curriculum litterature.
A very good overview of the different theories and myths related to team development. It introduced a richer model of team dynamics - using the metaphor of a whirligig. The idea is that there must movement (people shifting in and out of roles) and constructive confrontation (C2) in order to make the team highly productive.  Team building actives are not worth the money and do not ever strive for harmony.

Uncommon Sense Common Nonsense, Jules Goddard Tony Eccles, Februrary
The futurist speaker and author Patric Dixons never write book reviews on his web site, but made an exception  after 16 years. This pursuaded me to download the book on my kindle and read it. It kills many myths presented by management gurus. Tony Eccles was Professor of Strategic Management at London Business School for 15 years, and  Jules is a Professor at several business schools, and consultant to many large corporations. Its both entertaining and provoking - I was not disappointed.

Understanding Media, Marshall McLuhan, March
I get the feeling that Marshall McLuhan was on drugs (speed) when he wrote this book. To him everything is connected. Its and extremely comprehensive analysis how how media and technology have shaped the evolution of our thoughts and behavior. From tribal man to man living in "The Global Village". I will probably spend the rest of my life trying to grasp the content of this book - I am far from finished with it. His definition of media is very broad - anything that remotely can be a medium of communication between humans; Books, clothes, light - you get the idea. Marshall McLuhan saw things that was not visible to others - he describes the invisible parts of our culture. Its invisible to us, because its has become a part of us. He was far ahead of his time in foreseeing the effects of global communication. If you watch this  interview from 1960 you would assume he was talking about internet and social media - the world anno 2014 !!. It will be part of my life project to grasp the thoughts of Marshall McLuhan :-)

The Medium is the Massage, Marshall McLuhan, March.
The tabloid version of his core idea. Mostly images and little text. - You finish this in no time. Its weird.

Å Redde Liv (Saving Lifes), Terje Svabø May
"One of the best disaster relief worker the world has seen" is Jan Egelands description of Halvor Fossum Lauritzen. The book is a biography of a man who has spent the last 25 years organizing humanitarian aid in all the places we have heard of in the news; Africa's Horn, Afghanistan, Darfour, Haiti, Rwanda and many more. He has lead some of the largest operations in the IFRC´s history. He has also led UN´s work on analyzing how the current system of disaster relief can be improved. Although not to well written, the book was fascinating because it gives insight into many of the conflicts that caused the disasters, and into a the life of an adventurer with a clear mission.

Thinking fast & Slow Daniel Kanenberg, July
Its been on the list for a while. The psycologist Daniel Kanenberg is one of several non-economist who has won the Nobel Prize in Economics. The book is an easy to understand description of most of his work - including the prospect theory which nominated him and Amos Tversky for the Nobel Prize.

It gives a better insight into our brains flaws and potential. A core concept is the two modes of thought:
System 1: is fast, instinctive, emotional - it acts upon the information we have without considering if that is sufficient. Its a kind of autopilot that kicks in almost immediately when we are facing decisions.
System 2: is slower, more deliberate and more logical.

Based on many studies they documented peoples loss aversion - a bias that makes us treat losses and gains with a different rationality. Human choice are not symmetrical when dealing with equal probability for loss versus  gains. This points out a obvious flaw in the utility theory that has been the foundation of behavior economics.
Kanenman suggests that we place to much confidence in human judgement and System 1 thinking :-)


Hypnotisøren, Lars Kepler,  August-September.
In this psychological thriller, grotesque murders are linked back to psychiatrist Erik Maria Bark´s questionable practice of hypnosis many years ago. Once you have started - your on the rollercoster, you can't get off.

Behind the the pseudonym Lars Kepler, is the couple Alexandra and Alexander Coelho Adndoril who live and write in Sweden. The Hypnotist is set to appear in thirty-seven countries,


The Social Employee, how great companies make social media work, Oktober
A really up to date book on social media in business. Great examples of how big brands like IBM, AT&T, Dell embarked on their social media transformation, to empower employees and engage customers using social media. Highly recommended, if you have the slightest interest in how social media can and will transform business.

Blue Ocean Strategy, W. Chan Kim and Renée Mauborgne, Harvard Business Press, October
Curriculum littérature.
I love Blue Ocean Strategy. Its all about thinking outside the box- removing existing boundaries in terms of customers, marked, value-creation.. Rather than being focused on how to compete, we should focus more on how to make competition irrelevant. I think there is too little Blue Ocean Thinking in Norwegian companies, although its already a classic textbook at business schools. Most of the case studies did not have the notion of Blue Ocean, they are simple put into this category in retrospect, because they share some characteristics in their strategy. Some of the cases in our time are

Cirque the soleil - The Canadian company who reinvented Cirqus, by eliminating expensive animals  and the adding a new forms of artistic entertainment and cool music. By thinking outside the frame of what circus are, the can attract a new audience, and make competition with other circuses irrelevant.

Yellow Tail - the Australian wine maker that entered the overcrowded, low profit U.S. Wine marked with great success, by targeting beer drinkers and the huge proportion of the population that does not drink wine (yet)

This is my first time here. I find a lot of interesting things in your blog especially that I'm not the only one
Best Rated Inversion Table

The platform was completed to a very high standard, receiving excellent feedback in load testing and from high-profile clients beste mobil casino

Comparing the hot runner sweaters mould vs. the chilly runner mould exhibits properties, processes, and the way to decide on} the proper mould for your products. Student and educators could also be} eligible to receive a free subscription to injection molding simulation software program, Moldflow Adviser Ultimate. Read via numerous articles together with injection molding concepts, simulation how-to's, and troubleshooting. Some examples of these challenges embody material variations, weld traces, sink marks, warpage, long cycle times, and incomplete cavity filling.