Nassim Taleb: The Black Swan - the impact of the highly improbable

Nassem Taleb born in Lebanon (1960), focuses on problems of randomness and probability. He has been a wall street trader, hedge fund manager and professor at several Universities. 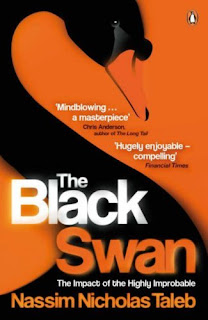 The book have been on my wish list for a while and it suddenly stared at me in a bookstore  - I decided to finally read it.

It is one of these rare books that is important not because of what you learn, but because of what you un-learn.Humans are in love with the thought that there is a casual link between all historical events and that that most things are possible to predict given the right models.

Economists and social scientists are also in love with simplemodels based on Gaussian curves where the mediocre is the centre and everything else is considered deviations from it. Very few real life phenomena actually fit this nice abstract mathematical model. If you are dealing with risk and the magnitude of one single event far from the norm is so big that it changes the whole game - you might be in trouble.

We have a strong bias towards building models based on the knowledge and information we have, and to a far less extent consider the possible impact of knowledge we do not have. This lead us to create models that nicely accounts for every single grass in the field, but rules out the possibility of a tree.
What we unlearn is a way of thinking that is so deeply rooted in us that Nobel price winners in economy also are trapped into it. Nassim Taleb is not afraid to pull several of them down from their pedestal.Randomness is basically lack of information. An event that may appear random to one person may not appear so to another. Black Swans are random events with an extremely high impact. 9/11 and the tsunami was a such Black Swans. Nassim Taleb make a convincing case that the events that shaped our history; wars, inventions catastrophes etc are such BlackSwans. So maybe the most important lesson to take home from history is that the future is highly unpredictable. But the way we rationalize around and teach history, is strongly biased towards predictability. So history hides the Black Swans from us.Taleb splits domains of randomness into two categories;

Mediocristian: when your sample is large, no single instance will significantly change the aggregate or total. The largest observation will remain impressive, but eventually insignificant to the sum. Mediocristian is non- scalable. distribution of weight in a populationfits such a model.In Extremian, inequalities are such that one single observation can disproportionally impact the aggregate or total. Say you lined up 1000 random people and looked at the their net worth, then you added Bill Gates to the sample. How much of the total wealth would herepresent. All the 1000 others worth would probably just represent 0,1% of the total. Distribution of wealth is scalable in a completely different way. The more you have - the more you are likely to get. It will not fit a Gaussian curve.

In his book he is referring to a huge list of literature and inspirators, amongst  these are:
Yossi Vardi and entrepreneur from Israel, and the mathematician Benoit Mandelbrot, mathematician and theoretical physicist Henri Poincaré, and economist and philosopher Friedrich Hayek.It is probably not correct to say its a simple read, but it is a very important book that changed my perspective on several aspects of life.

Email ThisBlogThis!Share to TwitterShare to FacebookShare to Pinterest
Etiketter: BOOKS